Donald Trump Not Thrilled With Ryan Budget: ‘Let The President Be The Lead’

Donald Trump Not Thrilled With Ryan Budget: ‘Let The President Be The Lead’ 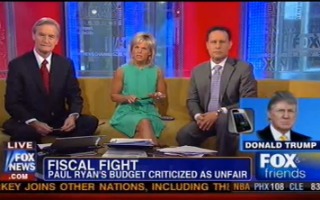 Real estate mogul, reality TV host and occasional political commentator Donald Trump called in to Fox & Friends Monday morning to talk about football star Tim Tebow’s move to NYC and, then, to weigh in on Paul Ryan‘s budget plan and the possible consequences it has for Republicans this election year.

“Well, I think it’s very bad politically,” said Trump of the plan, “and I think the Democrats are going to have a field day with it, and I think it’s just bad timing and I’ve said it before. I said it when he announced it originally and I’m saying it again. I think the Democrats will have an absolute field day, whether it’s pushing the old lady over the cliff or whatever they want to do, it’s — there are things in there that are — whether they’re right, wrong or indifferent, I mean, should wait until after the election. I think the republicans, if they actually pursue this, I think they’re making a big mistake. like I said, it’s up to the President. Let the president be the lead. Why are they taking the lead in this case? Now, after the election, that’s a different ballgame but for them to do it now I think is suicidal.”

RELATED: Tavis Smiley Has An Issue With Paul Ryan’s Budget Ad: If This Was Shot In A Gov’t Building, ‘That’s A Problem’

Host Steve Doocy asked Trump whether the Ryan plan makes “a clearer case” against the President, who “doesn’t want to mess with entitlements,” versus Republicans.

“I think it’s a very dangerous plan for Mitt Romney, to be honest,” he added, naming his candidate of choice. As for a Romney / Ryan ticket, Trump says that — despite his qualms with the timing of Ryan’s plan — he likes the guy, overall.
Have a look, via Fox News: