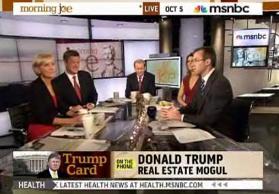 News got out yesterday that someone had been polling New Hampshire about the prospects of President Donald Trump, to some positive results, the real estate mogul and reality TV firer appeared on Morning Joe to set the record straight.

After laying out a loose platform, he revealed he’s “absolutely thinking about” running.

Trump began by bashing China for about three minutes, then discussing the presence and infrastructure building we’re doing in Iraq and Afghanistan. He also attacked Jimmy Carter. But finally, he got to answering the question Mika Brzezinski and Joe Scarborough tried to get out of him: is he actually thinking of running? Around the nine-minute mark, he gets around to answering.

Hi sreason: “Somebody has to do something. We are losing this country. This country will not be great if something isn’t done rapidly.”

Roland Martin of CNN wasn’t a big fan of the interview. From Twitter:

To my media friends, DO NOT WASTE AIRTIME on Donald Trump’s musings about running 4 president. It’s a joke & a pathetic attempt at attention
Trump for President is a stupid story we see every 4 years. This IS NOT a serious story. If asked, I’ll say it’s dumb and a waste of airtime
So @joenbc wouldn’t discuss the One Nation rally, but he’ll interview Donald Trump about running for president? What a joke.

No response from @JoeNBC yet.