Earnest: Obama Stands by Use of Word ‘Thugs’ to Describe Baltimore Rioters
VIDEO

Earnest: Obama Stands by Use of Word ‘Thugs’ to Describe Baltimore Rioters 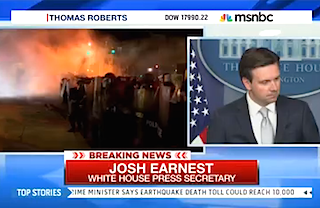 Baltimore Mayor Stephanie Rawlings-Blake may have apologized for her use of the word “thugs” to describe those rioting in her city, but as of now at least, President Barack Obama is not backing away from that terminology. In a clip shared by MSNBC Wednesday afternoon, White House Press Secretary Josh Earnest reiterated that message, saying, “whether it’s arson or the looting of a liquor store, those were thuggish acts.”

Earnest was echoing words used by the president in his extensive remarks on the issue Tuesday. “My understanding is, is you’ve got some of the same organizers now going back into these communities to try to clean up in the aftermath of a handful of criminals and thugs who tore up the place,” Obama said from the Rose Garden.

Following the clip of Earnest, MSNBC host Thomas Roberts asked Touré to help explain why and how that term has become so controversial.

“It’s a sensitive conversation because that word ‘thug’ has become synonymous with the ‘n-word,'” Touré said. “It’s become a polite, PC way to say the ‘n-word’ rather than typically describing somebody who is tough and violent and a little bit wild.” But after watching the actions of rioters, he added, “I don’t see much other word that you can use beside thug to properly describe who they are and what they’re doing.”

“We can’t say we can’t use the word thug at all,” he said. “There clearly are thugs in this world.”