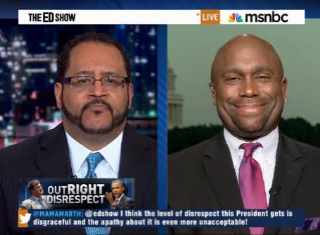 While yesterday’s news cycle remained in great part taken up by President Obama’s speech on immigration, the interruption by a Daily Caller reporter and the consequences and backdrop that could prompt an action like that were very much on the foreground on MSNBC, particularly on last night’s Ed Show. Host Michael Eric Dyson and Politico‘s Joe Williams found “very difficult” to separate the race issue from the disrespectful action, with Williams predicting the Daily Caller‘s access to the White House would be limited in the future.

RELATED: Bill O’Reilly Scolds Daily Caller Heckler: ‘You Must Respect The Office Of The Presidency’

“Disrespect for the President has been an issue since Day 1,” Dyson argued, citing as examples Rep. Joe Wilson shouting “you lie!” at the President and Gov. Jan Brewer‘s strong words on a tarmac to President Obama.” Dyson joked that the nation was “lucky to have a patient President, because I know a bunch of more brothers who would have been very, very intemperate at this time.” Williams added that another big problem with the behavior was that it was “basically stunt journalism, not designed to elicit any kind of answer.” He predicted that the backlash was not a positive thing for the Daily Caller.

Dyson asked, whether the event had “anything to do with the fact that this is the nation’s first black president and the level of disrespect is alarming and stunning,” to which Williams replied that it was “very, very difficult to place race outside of this context” because the “disrespect has been unprecedented.” He also argued there were “promotions of the Tea Party where they are using racially tinged imagery and racially tinged sort of statements to get their point across,” and it was “hard to divorce that” from these actions.

Williams did not predict a full ban of the Daily Caller from the White House, but “I do think that if anybody tries to get into the White House with the words Daily Caller after their name… they will probably not get the access that other people would.”