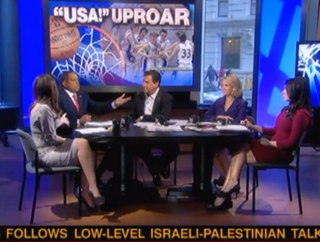 During today’s The Five, the group took a look at a delicate case of potential discrimination in a high school basketball team in Texas, where a team made up of mostly white students chanted “USA! USA!” at a mostly Latin American team after a victory. The ethnic discrimination seemed clear to the offended team, though some of the panel today found it difficult to come to the conclusion that patriotic fervor is inappropriate in any context.

RELATED: All Of Fox’s The Five Want President Obama To Give Bill Maher His Money Back

Andrea Tantaros was the first after Kimberly Guilfoyle‘s introduction to object to the idea of calling the team racist for using a “USA!” chant, particularly in the context of young athletes. She noted that the chant came from Olympic games, was used when the death of Osama bin Laden was announced, and often came up randomly in beer pong tournaments (“allegedly”). She added she couldn’t imagine her father, an immigrant himself, objecting.

Juan Williams disagreed. “I just can’t understand how anybody cannot feel the weight of what was a racially antagonistic statement made by these kids,” he noted that “clearly, this was not an international competition” and the overtones of “the white American kids have defeated you others” were abundantly ovvert to him. “When did it become racist to be patriotic?” replied Eric Bolling, though he did not get support from Dana Perino, who jumped in to support Williams’ point. “I don’t think they were playing a team from Venezuela,” she noted, and tried to explain the situation humorously as, “it’s like when you chant ‘establishment!’ at me.”

Bolling objected that the issue wasn’t so much the potential racism, but “the political correctness of what they are doing… They are apologizing for chanting USA, within the USA, playing another team from the USA, who likely has legal American citizens on their basketball team!” Tantaros agreed with the sentiment, adding that it was problematic in a slippery slope way, and the potential of censoring patriotism in school was a dangerous one to fertilize. Bolling agreed and likened the impulse to make the kids not chant in such a way to the objections to Tim Tebow praying after a game.

One of the most interesting aspects of this discussion is the way the panel breaks down on the story given their experiences. By Tantaros’ admission, both she and Guilfoyle come from a recent immigrant background, as does Williams. Of the three, only he objects– and Perino, slightly more removed, agrees with him. To compare the needless ethnic other-ing of the small team in such a small community to the mockery of a public figure like Tebow feels somewhat wide of the mark– it’s not like anyone chants “Christianity!” at Tebow during games. And the humiliation of being excluded from the only nationality one has because of ethnicity is entirely absent from the Tebow narrative– and from the narrative argued here that these are simple kid games the authorities should not involve themselves in.