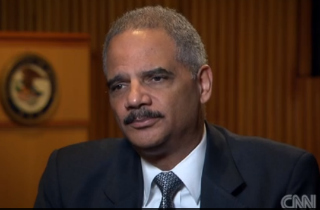 Outgoing U.S. Attorney General Eric Holder thinks former CIA Director Leon Panetta‘s controversial criticisms of President Barack Obama are “unfortunate” and should have waited until the current president is no longer in office.

Panetta’s new memoir, Worthy Fights: A Memoir of Leadership in War and Peace, features accusations that the president has damaged U.S. credibility abroad with his foreign policy decisions on situations like the one in Syria.

The former cabinet member’s harsh words were featured prominently on cable news, and became fodder for conversation over whether the Democrats are fracturing in face of multiple international crises.

In an interview with CNN, airing Monday afternoon, Holder said: “I think [what] Leon said in the book is unfortunate. But frankly, I don’t think it’s something that a former Cabinet member should do while the president he served is still in office,” Holder said. “That’s not something that I would even consider doing.”

Holder also asserted that Panetta’s descriptions of the president are inaccurate.

“The president is a deliberate person in an appropriate way. But he’s also resolute once he makes up his mind,” the attorney general told CNN. “Let’s remember, this is the president who took a chance in going after Osama bin Laden in the way that he did. He has been decisive in a whole variety of areas to keep the American people safe in doing it in a way that’s consistent with our values.”