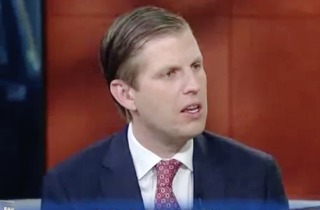 Eric Trump said on Fox & Friends Friday that he had heard a lot of speculation about whether NBC’s Matt Lauer, the host of an upcoming presidential forum that will be attended by Donald Trump, was a member of the Clinton Foundation or friendly with the Clintons.

“Listen, I hope Matt will be fair,” Trump said. “And we’ve known Matt for a long time and we have been on his shows many times. Obviously there’s a lot of speculation about his involvement with the [Clinton] Foundation, his knowing them pretty well and all else.”

.@EricTrump: I hope Matt Lauer will be fair, there’s speculation over his involvement with the Clinton Foundation pic.twitter.com/ORHpaww2hz

“I hope he’ll be fair,” he continued. “You see some of the stations at NBC, MSNBC in particular, I mean they may as well be a Super PAC against Trump. It’s really, really sad to see what happened to the media on that station. I hope that won’t be the case with Matt, I hope he’ll be fair.”

Mediaite noted Thursday that Lauer was at one point listed on the Clinton Foundation website as a member. But NBC sources say in a statement that listing was in error: “Matt Lauer was not and is not a Clinton Global Initiative member. He interviewed President Clinton from a CGI conference for the Today show’s live broadcast, not for the conference.”