Erin Burnett Grills Paul Bremer on Iraq: ‘Aren’t You the One Who Got Us into This Mess?’
VIDEO

Erin Burnett Grills Paul Bremer on Iraq: ‘Aren’t You the One Who Got Us into This Mess?’ 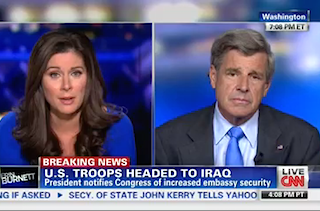 With the announcement Monday evening that more U.S. troops are headed to Iraq, George W. Bush’s Presidential Envoy to Iraq is making the media rounds. Paul Bremer appeared on MSNBC’s Morning Joe this morning and this evening got into a heated face-off with CNN’s Erin Burnett.

Bremer penned an op-ed for The Wall Street Journal under the headline “Only America Can Prevent a Disaster in Iraq,” in which he argued for some form of U.S. troops on the ground there. After 4,490 American lives lost and $1.7 trillion spent, Burnett asked him, “How can you advocate any more people, any more lives going to risk for that country?”

“Because it’s in our interest,” Bremer responded matter-of-factly, going to elaborate that the U.S. cannot allow Iraq to become a home base for terrorists like those that constitute the Islamic State in Iraq and Syria.

Taking on the role of the skeptical viewers, Burnett asked Bremer, “Aren’t you the one who got us into this mess?” She confronted Bremer with video from 2003 of him heralding Iraq’s “hopeful” future after the fall of Saddam Hussein.

Bremer defended his words and the actions the Bush administration took to bring democracy to Iraq, instead blaming the Obama administration for presiding over the deterioration of those gains over the last few years.

Throughout the rest of the interview, Burnett continued to push back against Bremer’s characterizations of the Iraq War as a “success,” especially given the state of the country today. After 15 long minutes, Bremer had not admitted any culpability for the swiftly unraveling state of Iraq today.