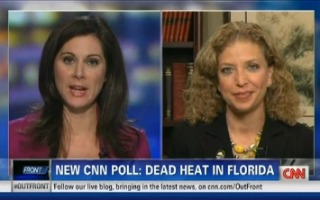 On Friday, CNN’s Erin Burnett shared new poll numbers out of Florida indicating that Mitt Romney currently has a one point lead over President Barack Obama among likely voters — a shift from the four point lead Obama formerly enjoyed over his GOP rival back in August. Additionally, Obama’s lead among female voters has dropped, and senior voters in the state favor Romney.

Burnett invited Florida congresswoman and DNC chair Debbie Wasserman Schultz onto the program to discuss this shift in support. Her message was not one of concern but, rather, one of emphasizing Florida’s tendency to vote for the incumbent president and on the Obama campaign’s aggressive ground efforts in the state. Burnett pressed on, however, asking Wasserman Schultz whether she wasn’t “frightened” by these new poll numbers.

“Well, no,” she replied. “What frightens me is Mitt Romney’s total lack of commitment to making sure that, when it comes to ensuring that women have equal pay for equal work, that he’s actually committed to that. He wouldn’t even answer the question in the debate the other night when asked pointblank whether he would have signed the Lily Ledbetter Fair Pay Act. He’s got Romnesia, which is a new affliction only suffered by Mitt Romney.” (OH BOY. Can we talk about how obnoxious this election has been in terms of stupid buzzwords? Loads of Rombamaloney all around.)

As for seniors and the endorsement of The Orlando Sentinel, Wasserman Schultz continued to focus instead on where others support Obama, offering oft-repeated talking points regarding Romney’s proposed policies, such as those regarding tax cuts, defense spending, and education. Burnett responded by underlining the shift in support and saying that it isn’t exactly “fair” of the Congresswoman to misrepresent Romney’s own comments about performing an “overhaul of tax policy.”

Have a look, from CNN: