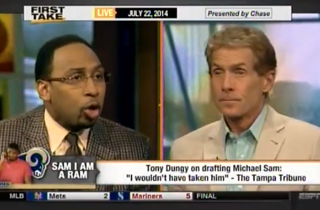 Sports talk shows have the capacity to be just as inane as cable news, and ESPN’s Stephen A. Smith just hit a new one: he and Skip Bayless fell into a heated debate about Tony Dungy‘s comments about gay NFL draftee Michael Sam. Smith argued that Sam’s sexuality was a problem, one which could impact the success of the St. Louis Rams, while Michael Vick, whose return to the NFL after being convicted for dogfighting cause massive controversy, was just a “nuisance.”

“Whether it’s a religious perspective, or taking his quote verbatim, [Dungy] happens to be right!” Smith said. “Somebody going to jail for a dogfighting scandal, serving his time in a prison, and then being in an NFL locker room, is not necessarily something that will cause a distraction in the eyes of players, compared to somebody that is gay in a locker room. We don’t like to say that, but it’s just the truth.”

Me personally, I’m like, live and let live. Do what you do….I am a proponent of most of the causes the gay community has fought for. And I think that it’s wrong how they’ve been prejudiced against. But having said all that, I think it’s important to recognize that that doesn’t mean people have a right to be comfortable with you.

“I’m shocked that you don’t see the problem here. I’m truly, utterly shocked,” a stunned Bayless responded, and the entire thing devolved into a shoutfest from there.

Watch below via ESPN: