Ex-RT Anchor Speaks Out on Resignation, RT Calls It a ‘Self-Promotional Stunt’
video

Ex-RT Anchor Speaks Out on Resignation, RT Calls It a ‘Self-Promotional Stunt’ 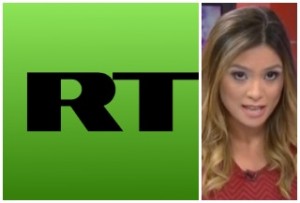 Liz Wahl, the RT anchor who made news today by very publicly resigning from her post, is speaking out in an interview with The Daily Beast, and she admits that “management is able to manipulate the very young and naïve employees,” finding ways to “punish you covertly.”

Wahl recalls an interview she did about French intervention in Mali that was scrapped for being “weak,” but she believes it’s because the interview didn’t fit into RT’s narrative that all Western intervention is “imperialism” and must be decried. And while RT supposedly aims to appeal to a young, cynical American demographic, Wahl warns that people shouldn’t be fooled.

“I don’t think it’s a service to anybody to push a narrative that’s not true or actively twist the truth.”

“It actually makes me feel sick that I worked there,” Wahl says. “It’s not a sound news organization, not when your agenda is making America look bad.”

Meanwhile, RT sent a statement to BuzzFeed dismissing Wahl’s announcement as a stunt.

When a journalist disagrees with the editorial position of his or her organization, the usual course of action is to address those grievances with the editor, and, if they cannot be resolved, to quit like a professional. But when someone makes a big public show of a personal decision, it is nothing more than a self-promotional stunt.

You can watch Wahl’s resignation below, via RT: