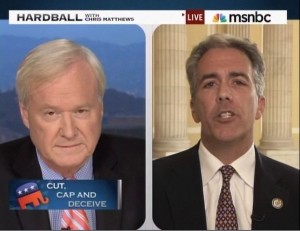 Add today’s debate between Chris Matthews and Republican Congressman Joe Walsh to the Hardball hall of fame for the most exciting and in-your-face political discussions ever recorded. Matthews perhaps set the tone by asking Walsh why Grover Norquist (Matthews’ sparring partner from yesterday) was the leader of the Republican party? Walsh dismissed the question as complete nonsense and began unloading on Matthews with a series of blows that were so brutal and blunt that they truly must be viewed to be believed.

Matthews demanded to know from Walsh where were the cuts in the proposal from House Republicans and why they were wasting time pursuing a balanced budget Amendment now, when the country could go into default in a few weeks if the debt ceiling was not raised. Walsh responded “where’s the President’s plan Chris Matthews” and stressed that it was Obama who wasn’t serious and was playing politics. Walsh also vowed that as a freshman Congressman, he promised to change how business is done in Washington and that’s exactly what the Republicans are now doing.

With the pleasantries out of the way (and by pleasantries I mean passive aggressive questions flying back and forth between the two men implying that the other had no clue what they were talking about), then the gloves really came off. Matthews interrupted Walsh’s response and said “let me ask you three questions,” to which Walsh advised “try one at a time.” Then as tensions began to rise, and as Matthews continued to suggest Obama was trying to be the reasonable one in the debt negotiations, Walsh had enough and unleashed the word: “tingle!” Walsh informed Matthews that the “the American people are beyond you” and unlike Matthews, Obama “doesn’t send a thrill up my leg.” According to Walsh, if anyone should be accused of wasting time it is the President, who did nothing on this issue for the past six months.

And just when the fight seemed to be calming down, both sides proved they were ready for Round 2! Matthews demanded to know “if we have a crisis in August will you resign?” Walsh thought the question was so silly, that he used that as an opening to launch a blistering attack on Matthews and his show. Walsh told Matthews “you bully guests” and “this is why people don’t come on your show, because it’s childish.” By this time Matthews took the criticism without much of a fight, but presumably only because the segment had to end eventually or maybe because Walsh’s media critique came completely out of nowhere. Either way, Walsh’s final line in this star-making turn for him proved that he is sure to be a name we’ll be seeing a lot more of, as he scolded Matthews, “you need to be more objective, but I love it.”

Watch the clip from MSNBC: