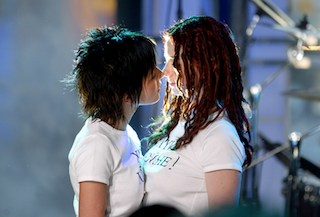 As the 2014 Sochi Olympic opening ceremonies approach, there has been much speculation about what American athletes might do to publicly protest Russia’s anti-gay laws. But now we have a peek at how Russia itself plans to address the issue. Billboard is reporting that the Russian duo t.A.T.u. will perform as part of Friday night’s opening ceremony. This is particularly pertinent because t.A.T.u. consists of two women who have a history of pretending to be a lesbian couple.

According to sources present at rehearsals, Lena Katina and Yulia Volkova will sing their mid-2000s hit, “Not Gonna Get Us.” At the beginning of their career, t.A.T.u. were believed to be lesbian couple, and would often kiss in music videos and on stage. But a documentary about them that aired on Russian television revealed that it was all a front. “He made us out to BE lesbians when we were just singing FOR lesbians,” Katina said in a 2004 interview about the group’s former manager. “We wanted people to understand them and not judge them. That they are as free as anyone else.”

They have apparently maintained their inclination towards protest. Russian media picked up on a now-deleted tweet Katina sent out regarding the opening ceremony performance. “They have invited us to perform at the opening ceremony of the Sochi Olympics, but they’re treating the artists like shit!!! The organization is horrible.”

The opening ceremony won’t air in the States until 7:30pm ET Friday night, but in the meantime, Perez Hilton obtained a photo from t.A.T.u’s performance below, in which they can be seen holding hands. “Putin wants everyone to think he doesn’t find gay people as illegally icky as everyone assumes!” he wrote. “They aren’t real lesbians, but they ARE holding hands! See?” 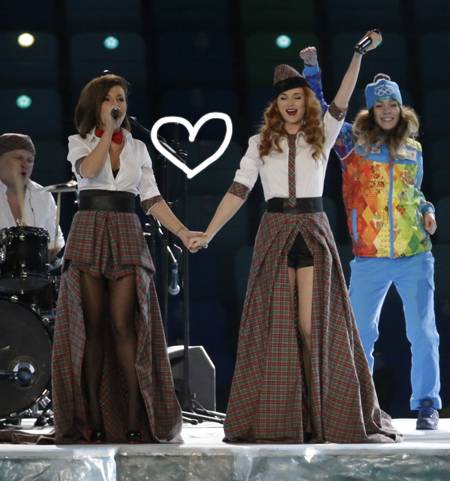 And you can watch the pair perform “Not Gonna Get Us” at the 2003 MTV Movie Awards below, via YouTube: