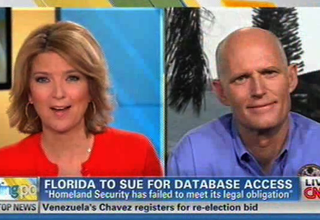 Florida Governor Rick Scott visited CNN’s Starting Point this morning with a lot of his plate, after the Department of Justice announced it would not accept his request for federal voter registration rolls to compare to his state’s in order to remove non-U.S. citizens, of which he says he has found at least 100. The Department of Justice suit against his state does not concern him, he told host Christine Romans, given that “we’ve done everything the right way.”

Gov. Scott explained that the situation began when he and his administration requested access to the federal citizenship database and were rebuked. “We know we have almost a hundred individuals that are registered to vote that are not U.S. citizens,” he explained, adding that “I have an obligation to enforce the laws of our land” that has been compromised because “Homeland Security has been stonewalling, [so] we have no choice but to sue.” He explained that his state has done “all the right things,” that they had not purged anyone from the registration rolls, but wanted to have a more accurate citizenship list to check on.

Gov. Scott also explained that the system does not automatically purge voter registration rolls, and that people who are found in violation can vote tentatively while they organize their proof that the state is wrong in pointing them out. “I can’t imagine anybody in America wants non-U.S. citizens to dilute a U.S. citizen vote,” he added, arguing that “you don’t have a right to vote in a Spanish election or an Italian election” without having citizenship there, either.

In response to arguments that his ploy is a partisan one to purge Democrats from the registration roles, he insisted it was not a partisan problem and that he wanted “every U.S. citizen to go register to vote, but non-U.S. citizens shouldn’t be doing that.”