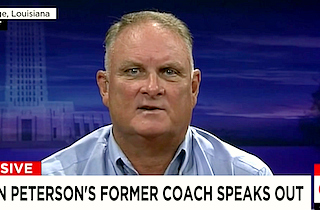 Adrian Peterson’s former coach Steve Eudey defended the embattled football player to CNN’s Michaela Pereira on New Day Thursday morning, arguing that Peterson was being unfairly lumped in with other players who were accused of intentional violence, as opposed to discipline that “went overboard.”

“Going overboard on discipline is not the same thing as hitting someone with your fist and knocking them down,” Eudey said. “I’m a simple American but that’s pretty plain.”

“I’ve talked to fifty-plus fathers in the past week, and they all agree: occasionally discipline gets away from you,” Eudey said. “You don’t mean harm or abuse. You are disciplining your child out of love. But sometimes stuff like that occurs. I’ve spoken with both of my sons in the last week and they’ve both reminded me of times that maybe I went a little overboard.”

“Surely you can understand there’s a little bit of difference in punishment to a child, or discipline to a child, and beating somebody up or shooting somebody at a nightclub,” Eudey said. “So I don’t understand how Adrian’s track record of kindness to people in general — I’ve never known the kid to be in a fight. So, to all of a sudden have him put together with some people that have done some other stuff, I just don’t understand it.”