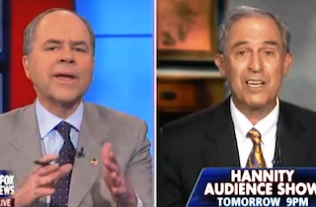 “You’re a great lawyer,” Hannity said to Davis, “and you’re a really good ‘it all depends what is is’ defending Bill Clinton and ‘I didn’t have sex’—But the reality is it went from the truth that this was terror related, Ansar al-Sharia, to a lie of this being related to a YouTube video.”

Davis pointed out that all twelve drafts of the administration’s talking points indicated that the CIA believed the attack was at least partially a spontaneous response to an anti-Muslim video, and that the president was not “advancing a narrative” he knew to be false.

“Are you accusing the CIA, Peter?” Davis demanded. “Is this a plot that the CIA was politicized by the White House?”

“I know you want to excuse the State Department for your own reasons,” Johnson said.

“The CIA was using those words,” Davis said.

“I don’t care whether it’s CIA, State Department, the White House, or the CIA,” Johnson responded. “It’s a web of deceit. The president contradicted himself.”

“You haven’t contradicted, have you, the fact that the CIA wrote those words,” Davis said.

At this point, Johnson exploded. “Lanny, you’re so good at defending the indefensible that it’s tough to argue with you! You’ve had more experience than anybody in American history in doing it. But you know the facts are not with you here.”

“Lanny,” Hannity asked, “is there any part of this in your liberal, Clinton-supporting mind, that is bothered about this?”

“Not that you do name calling,” Davis said. He tried to point out that while the events had already been investigated by Admiral Mike Mullen, who issued a report complete with policy recommendations, but Johnson continued to talk over him. “If you think your interrupting me is going to obscure your inability to say yes or no to a fact—” Davis attempted to say, though Johnson interrupted him again.

Hannity finally changed the subject to James Rosen, to give Davis “a chance to redeem [himself].”