Fox & Friends Is Very Confused About Obama’s Claim That U.S. Is Being ‘Lazy’ In Attracting Businesses 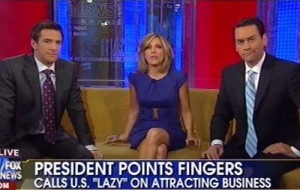 President Obama met with CEOs for the Asia-Pacific Economic Cooperation Summit this weekend, and raised some eyebrows when he said that the United States has been “lazy” in trying to attract businesses to the United States. Fox & Friends reported on the story today, and for the life of them, they could not seem to figure out exactly what the president was trying to say. How unclear were Obama’s words? The morning show devoted three separate segments to it earlier today.

Before we get to their reactions, here’s the full context of what the president said, from USA Today:

QUESTION: I think one related question, looking at the world from the Chinese side, is what they would characterize as impediments to investment in the United States. And so that discussion I’m sure will be part of whatever dialogue you have. And so how are you thinking about that?

PRESIDENT OBAMA: Well, this is an issue, generally. I think it’s important to remember that the United States is still the largest recipient of foreign investment in the world. And there are a lot of things that make foreign investors see the U.S. as a great opportunity — our stability, our openness, our innovative free market culture.

But we’ve been a little bit lazy, I think, over the last couple of decades. We’ve kind of taken for granted — well, people will want to come here and we aren’t out there hungry, selling America and trying to attract new business into America. And so one of things that my administration has done is set up something called SelectUSA that organizes all the government agencies to work with state and local governments where they’re seeking assistance from us, to go out there and make it easier for foreign investors to build a plant in the United States and put outstanding U.S. workers back to work in the United States of America.

And we think that we can do much better than we’re doing right now. Because of our federalist system, sometimes a foreign investor comes in and they’ve got to navigate not only federal rules, but they’ve also got to navigate state and local governments that may have their own sets of interests. Being able to create if not a one-stop shop, then at least no more than a couple of stops for people to be able to come into the United States and make investments, that’s something that we want to encourage.

During the 6 AM hour, the F&F hosts reacted to the president’s words by suggesting he was talking about companies who were moving their operations overseas, and pointed out the difficulties of starting a businesses within the United States. But at the end of the segment, none of the three hosts could really tell who it was Obama was addressing his comments to.

Finally, two whole hours later, they touched upon the story for a third time, and… they’re still saying the same things. In fairness, when you’re stuck hosting a morning show for hours at a time, you’re probably going to repeat yourself. But you’d figure that if they’re going to come back to a story later on, they would have some additional thoughts on it.

Watch all three segments below, courtesy of Fox News: