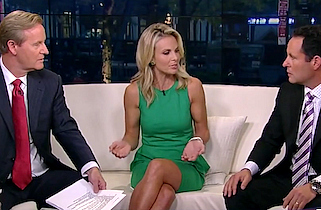 On Tuesday morning, the hosts of Fox & Friends loudly denounced the one-bid process for choosing the IT company that designed the Obamacare exchange’s websites, which have been consistently malfunctioning in the first two weeks of the program.

“It sounds like the government contracting process was not used for this particular company,” co-host Steve Doocy said. “The contract was awarded to an American subsidiary of a Canadian company with very spotty past with IT. Big question is why did they wind up with the contract worth maybe billions of dollars?”

“Where is the accountability? Is it in hiring someone without checking out other bidders?” co-host Elisabeth Hasselback asked. “I don’t put in or replace a bathroom sink without getting a couple bids in there.” (“You shoulda used my brother!” Kilmeade said.)

“He’s at least saying what we all know,” co-host Brian Kilmeade said. “You might love it, but if you can’t use it, how good is it? And you’ve had three years to get it ready. There’s two phases to this. can I register to use it, and will it work? We’re not even up to the will it work part because we don’t know how to use it, because we can’t register in it!”

“But this is how big government works,” Doocy said. “Apparently this outfit, this Canadian firm back in 2009 got a special deal with the government where they could zip through, kind of an Easy Pass thing where you wouldn’t have to contract out if they needed it real fast. This is the biggest rollout in the history of the United States, computer-wise, and it has failed miserably. And people are going, why exactly did that Canadian company get that job?…Who at HHS said, let’s go with the Canadians?”

“Plus they have a football league that only has three downs,” Kilmeade said. “That’s why the Canadians don’t deserve this.”