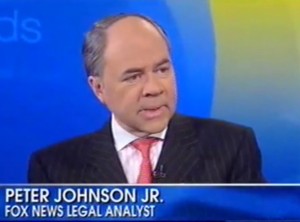 Once again, the Fox and Friends gang has made itself a platform for the dissemination of dangerously false medical information. On Monday morning’s F&F, during a discussion of Health and Human Services Secretary Kathleen Sebelius‘ announcement that religious employers will have an extra year to comply with the preventive services mandate, Fox News legal analyst Peter Johnson, Jr. falsely claimed that the regs require such employers to “provide drugs that induce abortions.”

The Obama administration announced, last year, that insurance plans would be required to provide a raft of preventive services, including contraception and sterilization. Currently, religious organizations enjoy a “conscience exemption,” but Sebelius’ announcement means that non-church religious employers will be required to cover such services, without deductibles or coinsurance, beginning in August of 2013.

In discussing outrage over the announcement, Fox legal analyst Peter Johnson, Jr. falsely claimed that President Obama “has said the federal government is going to demand that Catholic universities, Catholic social service agencies, and Catholic institutions other than churches provide drugs that induce abortions, provide sterilizations, provide contraceptions free, really in violation of Catholic faith and really, other organizations and other religious organizations, it violates their faith.”

In fact, I don’t even watch Fox and Friends all that much, but out of the four times I’ve tuned in this month, they have done this twice.

The fact is that emergency contraception doesn’t “induce abortions,” and can’t induce abortions. Plan B must be taken within 72 hours of unprotected sex, and the “Ella” pill, within 120 hours, long before a pregnancy could actually occur.

Anti-abortion activists have tried to muddy the waters, not only by falsely calling Plan B a “morning after abortion pill,” but by also claiming that “Ella” can cause abortions if taken after pregnancy occurs. This isn’t based on any evidence (the drug hasn’t been tested as an “abortion pill,” but women who have inadvertently taken it after becoming pregnant haven’t had problems), but on the notion that “Ella” is “chemically similar” to RU486. As far as that goes, water is “chemically similar” to hydrochloric acid, but you don’t see anyone trying to ban Dasani.

Even the activists who posit this evidence-free claim do so under the hypothetical premise that women would use the drug outside its recommended effective time frame, and in hugely excessive doses. Based on that logic, you could ban any drug, and there’s still no evidence that, even then, “Ella” would induce an abortion. Here are the facts about Ella:

There is a legitimate discussion to be had over whether the Constitution protects religious organizations’ non-religious activity (in my view, it doesn’t), but giving out false medical information is not only irresponsible, it’s dangerous. Fox & Friends should correct Johnson’s reporting.