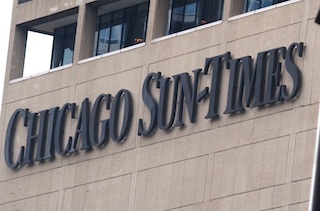 Today, The Chicago Sun-Times published an editorial by publisher John Barron and editorial page editor Tom McNamee explaining that the paper will no longer be endorsing candidates in any future elections. The paper has been making endorsements since its founding 71 years ago. However, as the editorial explains, readers have made it clear that “[they] can make up [their] own mind, thank you very much.”

The editorial argues that newspaper endorsements are a thing of the past, a relic of an era when newspapers were blatantly biased. Barron and McNamee compare that era of yellow journalism to current standards in cable TV (What? Cable TV news is biased and partisan? That’s pure poppycock and hogwash!), but say that, nowadays, newspapers are needed to “inform” readers, not “spin” them. Besides, endorsements don’t matter anyway.

“What we will not do is endorse candidates. We have come to doubt the value of candidate endorsements by this newspaper or any newspaper, especially in a day when a multitude of information sources allow even a casual voter to be better informed than ever before.

Research on the matter suggests that editorial endorsements don’t change many votes, especially in higher-profile races. Another school of thought, however — often expressed by readers — is that candidate endorsements, more so than all other views on an editorial page, promote the perception of a hidden bias by a newspaper, from Page One to the sports pages.”

A pledge to present nonpartisan news? That will never work in 2012. We can only assume that, within the next couple of years, the Sun-Times will have made “We inform, you spin” their motto and quietly replaced “endorsements” with “educated suggestions.” After all, as we all know, preached-to choirs, buy more copies.