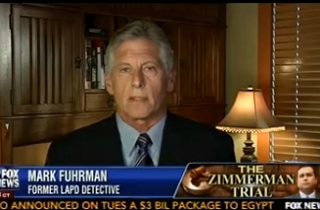 The infuriating noise surrounding white apprehension over potential violence in the wake of a George Zimmerman acquittal has officially jumped the Sharks and the Jets. On Wednesday night’s Hannity program, host Sean Hannity broached the topic with his guests, and asked noted Fox News contributor and race-relations expert Mark Fuhrman just how “on guard” Florida law enforcement agencies need to be. Fuhrman responded by indicting the threat of violence, which has only been made in people’s heads, as a “pathetic statement for our country.”

The Broward County Sheriff’s Department did release a PSA urging calm in the wake of the upcoming verdict, but Broward Sheriff Scott Israel was also careful to say that there has been no specific threat of violence. Apparently, there is one in Mark Furhman’s head.

“The Broward County Sheriff’s office is preparing a Zimmerman verdict riot plan, that was laid out today.” Hannity said to panelist Valerie Boey, a local Fox reporter. “That is in your hometown. Is this being discussed a lot in the area?

“We have been discussing this for months now,” Boey replied, “and we have actually had peacemakers, someone from the Department of Justice here since this all started, getting the pastors together, getting people in the community together and trying to improve race relations, so that we will not have riots. And the mayor here says that it should be peaceful. Of course, that’s what we all hope.”

Hannity then asked Fox contributor Mark Fuhrman, “How on guard must they be?”

The Broward County Sheriff’s Department did release a PSA urging calm in the wake of the upcoming verdict, but Broward Sheriff Scott Israel was also careful to say that there has been no specific threat of violence. Apparently, there is one in Mark Furhman’s head.

“Well, I suppose that they’re going to prepare, as they would for anything that’s gone sideways like this,” Furhman said. “I think it’s pathetic that a court of law cannot be in a vacuum of the legal system, without the influence of the public threatening to do great bodily harm to people and property. It’s really a pathetic statement for our country.”

Most people are familiar, by now, with Mark Fuhrman’s well-documented history of racism, and criticism of his use as a cable news contributor has been noted before. Somehow it’s been decided decided that his value as an expert outweighs any problem this might present to their audience. It has also been noted that using Fuhrman as an expert contributor on this particular story is, shall we say, provocative at best.

But the use of Fuhrman, in this clip, inadvertently serves to illustrate the gulf between the sides that have been taken in this story. Mark Fuhrman, who is outraged at nonexistent threats of violence by black people, thinks it’s funny to “choke out” black people:

“Why don’t you give them the 77th lie detector test? You know, everybody–and a bunch of guys will laugh–old-timers, you know. And then one kid will ask his partner, ‘What’s that?’ You keep choking him out until he tells you the truth. You know it is kind of funny. But a lot of policemen will get a kick out of it. Anyway, so you are in the shadows like that. Now you’re–when you are talking to somebody it is not like you are really listening into their words because you’ll key on what is the truth and what isn’t. First thing, anything out of a nigger’s mouth for the first five or six sentences is a f—— lie. That is just right out. There has got to be a reason why he is going to tell you the truth.”

In the case of Trayvon Martin, you have one group of people, myself included, who feel that what happened to that unarmed teenager was fundamentally unjust, that an unarmed teenager who is walking home, minding his own business, and ends up being shot and killed, deserves justice, deserves a voice. An acquittal would be a refutation of the value of that young, lost life.

On the other side is a group of people who are offended that this crime is even being prosecuted. To them, it is unjust that George Zimmerman is even being tried for killing that young man, and that injustice stems from the fact that Trayvon Martin is black. I can think of no better messenger for that notion than Mark Fuhrman.