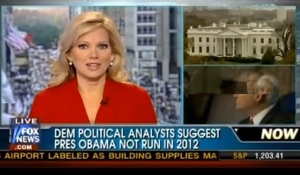 Fox News’ Democratic analysts have thrown President Obama under the bus: Doug Schoen and Pat Caddell suggested this weekend that the Democratic Party must cut off its head to stand a chance in 2012. Schoen was back on America Live earlier today to defend his point of view from former Gov. Ed Rendell, who found the proposition premature and borderline problematic.

Shannon Bream, filling in for Megyn Kelly today, moderated the discussion, in which Schoen reiterated his reasons for the President to step aside and let the party regenerate. “[The President] is talking about hand-to-hand combat with his enemies,” Schoen noted, “that’s not what we need right now.” Rendell saw the polarization of the country as problematic as well, but considered any exacerbating of said polarizing by the president to not be enough to have him step aside. Instead, Rendell proposed that the president call for both parties to make sacrifices for the good of the nation, and if he could make both Democrats and Republicans understand that “there is shared pain” in the nation, his job would be safe. Those sacrifices, he continued, would include entitlement reforms for the Democrats and military spending cuts for the GOP.

Schoen completely agreed with those reforms, but also saw it as a sign of leadership for the president to step aside: “We’re not talking about stepping down,” he explained, referring to himself and Caddell. “We’re talking about stepping up and providing leadership for the country… governing in a way that puts the problems first.” He also harkened back to an interview with Diane Sawyer where President Obama noted he would rather be a “great one-term president” than a “mediocre two-term president.”

While neither Democrat convinced the other their approach to the President as an individual within the party was correct, by the end of the segment it seemed that Schoen had found a new person to endorse: Gov. Rendell himself for White House Chief of Staff.