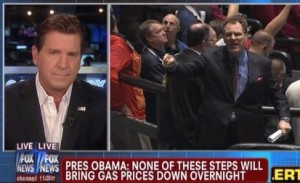 President Barack Obama announced on Tuesday his administration’s support for new measures that would crack down on oil speculators in an effort to reduce the price of gasoline at the pump. Following the president’s press conference, Fox News contributor Eric Bolling and Fox Business analyst Phil Flynn exchanged a heated war of words over the impact of the president’s policies on the oil market.

Eric Bolling, who hosted a special on the “Pain at the Pump” with former Alaska Gov. Sarah Palin last week, appeared to support the president’s proposed initiatives. Bolling said that one of their recommendations was precisely what the president had proposed.

Bolling said that he and Palin recommended that the government “give the CFT [U.S. Commodities Futures Trading Commission] more teeth, if you will,” said Bolling. “Let them go after traders who are rouge traders. And That’s not a bad thing. Also raise the margin requirements – most importantly – raise the margin requirements on trading energy futures. It’s not a bad idea.”

Flynn could not disagree more vehemently. When asked what he believed the effect of Obama’s new regulator measures would be, he responded without hesitation that “it means that you’re going to pay higher gasoline prices and higher oil prices.”

“I can’t believe what I’m hearing out of Eric Bolling,” Flynn continued. “This is unbelievable. This is nothing but a political red herring for a failed energy policy. You’ve got the president taking credit for more oil production that was all George W. Bush that he was against, and now a scapegoat because oil prices are rising.”

Bolling interrupted, “I didn’t say that this alone was going to drop the price of gasoline. I said this in conjunction with more drilling – embracing natural gas…”

Crosstalk ensued when Flynn objected to Bolling’s clarification. Bolling appeared to get heated when he asked Flynn if he “ever had to make a margin requirement?”

“The reason why open interest and oil are at the highest level ever is because the risk to the global economy is higher than it’s ever been,” said an increasingly agitated Flynn. “You’ve got interest rates that are negative right now. You’ve got countries on the verge of bankruptcy right now. You’re seeing billions of dollars being forced into these markets because the Federal Reserve wants you to. They’re printing more money because they want people to take risk in this economy. I don’t think people get it.”

Flynn received Rick Santelli-like cheers from the floor of the exchange that he was broadcasting on when he asserted that he knew better than Bolling on the subject of oil trading.

“The last time the government tried this type of manipulation in the markets was the 1970s,” said Flynn. “We ended up with price controls, gas hikes and shortages.”