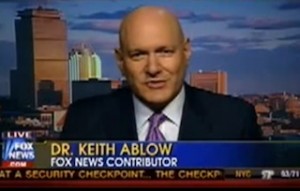 Professional talking heads try to follow a number of simple rules when appearing on television — basics guidelines like sitting up straight, looking to camera and not wearing clothing with small patterns of stripes or checks. And though it’s not a generally accepted standard because it hasn’t probably come up that often, let’s add the following axiom: never assure to a fellow debate opponent that you are “not a pedophile,” as Dr. Keith Ablow did this morning in an appearance on Fox and Friends.

The odd proclamation came during a surprisingly spirited discussion in which he and fellow panelist Jessica Gottlieb discussed the merits and drawbacks of a new “breastfeeding baby doll” that is soon to be coming out in America stores.

After introducing the controversial new toy called “Breast Milk Baby” that approximates breastfeeding to young girls, Ablow opined that he thought the toy was “beyond ridiculous” and “destructive,” before adding that it “contributes to the sexualization of children and it makes them targets of assailants.”

Gottlieb, a self-described “mommy blogger” respectfully disagreed, saying that she wasn’t sure that “if you see a little girl as her breasts being sexual that that doesn’t reflect more on you.” Ablow quickly interjected “I assure you I’m not a pedophile at all.” We believe Ablow when he proclaims that he is not a pedophile, but to be honest, we hadn’t considered that idea until he raised the subject himself.

Watch the awkward segment below, courtesy of Fox News: