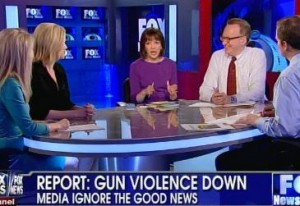 Citing a new Department of Justice study that shows a decrease in gun homicides from 1993-2011, host Jon Scott cited polls showing a lack of awareness among Americans for decreased gun violence, and asked if the media is covering up these positive statistics.

Former Spokesman for U.S. Ambassadors to the U.N Richard Grenell argued that gun violence has clearly gone down, hitting MSNBC for playing down the story as “well, this doesn’t necessarily mean the problems been solved.”

New America Foundation’s Jim Pinkerton sarcastically chimed in, considering the possibility that the media has a “gun control agenda that leads them to trumpet school shootings to push the country in a certain direction.” Journalist Judy Miller countered with a call for context, praising MSNBC’s Rachel Maddow for pointing out that there are still 11,000 gun deaths a per year.

Liberal columnist Kirsten Powers jumped in with the camp that says “one gun death is too many gun deaths.” Powers agreed that the media should cover all statistics, even those that show improved gun violence statistics, but argued those numbers “don’t disprove” that we need gun control.

Conservative radio host Monica Crowley noted the statistics don’t show a massive gun crime wave happening, and that mass shootings are weighing heavily on the national psyche. Crowley hit the “gun control advocates” in the media for wanting Americans to believe there is a growing gun epidemic.

Pinkerton also derided the medias outright advocacy, citing how whenever there’s a tornado, the media is there to jump on it ringing about global warming, but not so when gun numbers don’t fit the narrative of country stained by gun violence.

Watch the segment via Fox News: