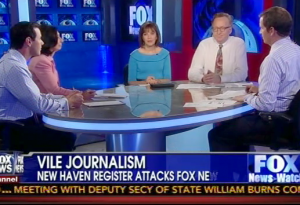 Fox News Watch today tackled the ongoing saga of Anthony Weiner and the media coverage of the sext-happy mayoral candidate. But after the fun and games, they also had some choice words for the New Haven Register for publishing an editorial likening Fox News, Ted Nugent, and Ann Coulter to the KKK, only to offer an apology after being called out by Bill O’Reilly. Host Jon Scott suggested this may be a “signal that liberal media just doesn’t like opposing views.”

On Weiner’s latest bout of campaigning, Scott suggested Weiner and Bob Filner might turn the whole “war on women” idea on the Democrats’ head. Judith Miller criticized the “absence of reporting on the Hillary Clinton-Huma Abedin connection” in favor of more tabloid-y exposés on the women Weiner was sexting.

Scott then tackled the “unfounded bit of editorial vile” in the New Haven Register that compared Fox to the KKK. Mediaite’s Joe Concha mocked the paper’s weak apology, saying no matter how contrite they may be, “they probably sold a lot more papers, they got a lot more publicity, and they’re completely irresponsible in saying something like that.”

Scott asked, “Is this a signal that the liberal media just don’t like opposing views?” Ellen Ratner argued the problem was they “dropped the bomb” without having a single piece of evidence to back up the claim, while Miller noted this mindset goes back al the way to the Obama administration when it “denied Fox News was a news channel!”