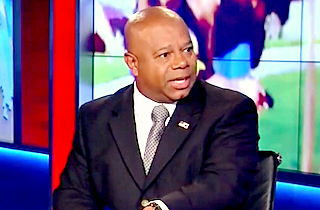 A Fox News panel starring conservative talk radio host David Webb got heated Tuesday morning on the topic of whether race factored into the melee at a McKinney pool party last weekend. You’ll never guess what: Webb didn’t think so!

Video posted to YouTube Sunday showed officers manhandling unarmed teenagers, with at least one officer drawing his weapon. It remains unclear what started the initial dispute. Teenaged witnesses contend adults told the African-American kids to “go back to Section 8 housing,” after which cops arrived and targeted minorities. Adults, many of them talking to Megyn Kelly or Sean Hannity last night, disputed that characterization, arguing the cops were trying to control biracial chaos.

“It doesn’t necessarily promote race saying ‘go back to Section 8 housing,'” Webb said, though he did not propose an alternate interpretation. “You have a majority black crowd, which means if the majority of people are being unruly, most of them are black. The police officers…are looking at the crowd as a whole, not picking out, let’s go after that black person or that black person.”

(That is exactly what the teen who filmed the video reported they did, FWIW: “Everyone who was getting put on the ground was black, Mexican, Arabic. [The cop] didn’t even look at me. It was kind of like I was invisible.”)

“I think if these kids had all been white, the police officers would have done the exact same thing,” said host Martha MacCallum, who nonetheless strongly denounced that behavior.

“I have been in unruly crowds,” Webb continued. “With all due respect I spent two decades going into the riots, whether it is Ferguson or Raleigh, North Carolina…It’s not that easy. It’s great to sit here and pundit about it. But maybe you out to live it a little.”

“And those were all racially-charged,” countered Marjorie Clifton.