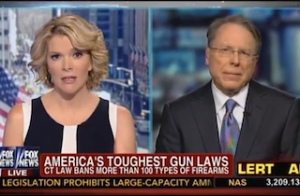 Megyn Kelly welcomed NRA executive Wayne LaPierre on her Fox News show Thursday to get his reaction to the passage of a new comprehensive gun control bill in Connecticut that would ban the sale of magazines carrying more than 10 bullets and require background checks for all firearms. Kelly pressed LaPierre to explain why the NRA opposes these provisions despite the support they receive from many of the Newtown, Connecticut parents who lost children in the Sandy Hook Elementary School massacre.

Before letting LaPierre speak, Kelly showed him clips from a recent episode of CBS’ 60 Minutes, in which Scott Pelley interviewed Newtown parents who described how the shooter’s gun jammed when he eventually did have to change magazines, which they believe ultimately saved the lives of many children who were able to escape. “Those families directly affected say if Adam Lanza, the shooter at Newtown had not had 30-round magazines, if he’d only had ten rounds in the guns, more children would have lived,” Kelly said to LaPierre. “Your thoughts?”

LaPierre dismissed that notion outright saying, “My thought is how little it has to do with keeping kids safe and how much it has do do with this decade-long agenda against firearms that some of the political class and the media have had.” Instead, he said that the country should focus on putting armed guards in schools and fixing the “broken mental health system.”

Kelly pushed LaPierre to address the specific issue of magazine limits “compellingly” put forward by the parents and now passed by the Connecticut legislature, interrupting him when he attempted to dismiss the notion that less children would have been killed if the magazine limit had been in effect. “People that know guns know you can change magazine clips in a second,” LaPierre responded, stammering a bit. “There’s no evidence that, you know, that anything would have changed.” He quickly pivoted to explaining why law-abiding gun owners often need large magazines for self-defense.

The grilling LaPierre received from Kelly was some of the hardest questioning he has received from Fox News since Chris Wallace called his arguments “ridiculous” back in early February. Clearly moved by the Newtown parents’ case, Kelly challenged LaPierre to offer up his opposition to such views.