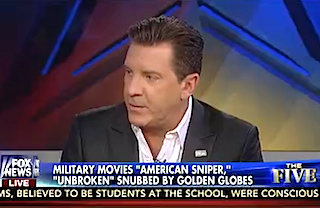 This year’s Golden Globe nominations came out yesterday morning, and as always there were some major snubs. And Fox News’ The Five thinks it knows why certain movies were left out.

As host Kimberly Guilfoyle explained, both Unbroken and American Sniper, based on real-life heroes from World War II and Iraq, respectively, failed to get nominations in the Best Drama film category. “Does Hollywood have a problem with films they find too pro-military?” she asked.

Eric Bolling was the first to buy that premise, saying, “They’re all liberal nut jobs in Hollywood, anyway.” You can only imagine what he would think if he knew these awards were voted on by the Hollywood Foreign Press Association. “I would be surprised to see anything faith-based or military-based in any of these,” he said.

Dana Perino pointed out that both the Golden Globes and the Oscars showered love on Zero Dark Thirty two years ago, because that was praising President Obama.

The snub of Unbroken by the Globes was particularly surprising because that film has long been at the top of many Oscar-watchers’ Best Picture lists and because it’s director is Angelina Jolie. The Hollywood Foreign Press has a history of nominating major stars like Jolie at any opportunity, including for 2010’s widely-hated The Tourist. While the film is still likely to make the list of up to 10 Oscar Best Picture nominees, Jolie chances of scoring a Best Director Oscar nod just got a lot slimmer.