Fox’s Wallace Grills Lanny Davis: ‘Do You Ever Get Tired of Cleaning up After the Clintons?’
VIDEO

Fox’s Wallace Grills Lanny Davis: ‘Do You Ever Get Tired of Cleaning up After the Clintons?’ 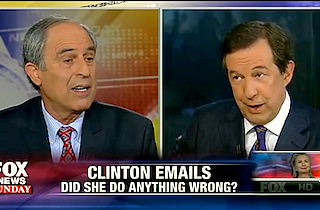 Fox News Sunday host Chris Wallace conducted a borderline-contemptuous interview Sunday morning with longtime Clinton defender Lanny Davis, who probably has his own office at Fox News by now. Davis has defended Hillary Clinton’s use of a personal email account as Secretary of State as not only not illegal but not wrong.

Davis said that Clinton’s use of personal emails was in line with the behavior of previous Secretaries of State, to which Wallace responded that the rules for archiving electronic correspondence had changed before Clinton’s tenure. (There’s widespread confusion on this matter, as Mediaite covered here.)

“You, Chris Wallace, might have a subjective view of what might have happened — I hear the word ‘may’ — I’m talking about what is the case,” Davis said. “The fact is, nobody says it’s illegal. She’s turned over all of her emails — the first secretary of state to do that. And going forward, they’re available for access.”

Wallace also lost it when Davis seemed to congratulate Clinton for the “unprecedented move” of volunteering her emails. “She did volunteer to release all of those emails,” Davis said. “She’s the only secretary to openly ask the public to look at all those emails and wants them published right now.”

“She didn’t volunteer!” Wallace objected. “She had to negotiate for four months with the State Department lawyers before she turned them over.”

Finally: “Do you ever get tired of cleaning up after the Clintons?” Wallace asked.

Davis naturally didn’t think of it as “cleaning up” and said he was proud to work with the Clintons. “There have been mistakes, but the last time you got very heated about the Clintons was Whitewater,” Davis said, though Wallace denied having covered Whitewater. “This is another bogus ‘scandal.'”

“Bill Clinton left with a 65% approval rating,” Davis continued. “Hillary Clinton today is the most popular politician in the country. And you’re discussing a non-scandal…It’s all politics.”