Friday The 13th Is Here: The Cycle Hosts Talk About Superstitious Beliefs
video

Friday The 13th Is Here: The Cycle Hosts Talk About Superstitious Beliefs 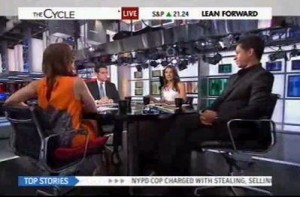 It’s Friday the 13th, which means millions of superstitious people all over the country will be very easy to troll. In fact, this is the third Friday the 13th this year, with all three being exactly thirteen weeks apart from each other. Spoooooky! But seriously, superstition is a very common human belief, and the four hosts of The Cycle today talked about superstition and the irrational beliefs they hold very dear to their hearts. Krystal Ball pled guilty to being superstitious, while Touré, S.E. Cupp, and Steve Kornacki denied having any such beliefs.

Ball admitted that she is not particularly superstitious about today, but she does have a weird thing about the time 11:11. Many people often associate this time of day for making wishes, because somehow having the same number repeat itself four times is going to make your dreams come true. But Ball said she tends to view the time as more of an omen, either a good or bad one, and it’s never neutral.

Touré joked that he used to have similar feelings about 4:20, but then said he believes superstitions to be “self-fulfilling prophecies.” When one of the other hosts tried to push back a little and promote the power of positive thinking, Touré warned that they were getting into “The Secret territory” which, in any rational discussion should be avoided at all costs.

Ball tried to press Touré on whether he has any superstitions whatsoever, suggesting that when people cheer on their sports team, it’s a kind of superstition. This is, of course, not true. Wearing your lucky underwear because “every time I wear it the Broncos win a game”? Now that’s superstition for you.

Cupp said that as the show’s resident atheist, it shouldn’t be surprising that she doesn’t harbor superstitions either. However, she did go along with the sports theme to bring up Turk Wendell, a former MLB player, who was so superstitious, he had to “chew four pieces of black licorice” while he was pitching, and then brush his teeth afterward.

Kornacki denied having any superstitions, though he did admit to having “irrational fears and some compulsive tendencies.” He explained that in the NBC building when he walks up the stairs and either has to go left or right, he might avoid the side where something bad happened the previous day. Kornacki also said he avoids cracks on the sidewalk when he pays close enough attention and checks select locations in his house to see if people are hiding there. Of course, these aren’t superstitions to Kornacki, they’re just methods of “self-protection.”

In fact, you know that phenomenon where you learn a piece of information or meet someone new, and then start seeing that thing or person pop up everywhere? You might be superstitious about that, but here’s your fun fact of the day: there’s actually a psychological explanation for this phenomenon called the Baader-Meinhof Phenomenon. There, you’re welcome, you superstitious hordes. Now go spill salt or something.

After standing on one leg, hopping in a circle, and counting backwards from 100, you can watch the video below, courtesy of MSNBC: