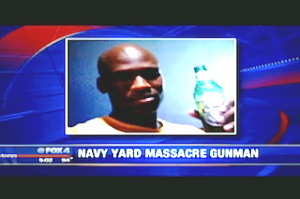 As is often the case when a horrific mass shooting like the one that took place this morning at the Washington D.C. Navy Yard happens, the descriptions of the alleged gunman from friends and acquaintances do not match up with the horrific nature of his crimes. In the case of Aaron Alexis, who authorities have identified as the man who murdered at least 12 before being killed himself, the most striking description to emerge is that he considered himself a Buddhist.

The Fort Worth Star-Telegram spoke to people who knew Alexis, including Nutpisit Suthamtewakul, owner of Happy Bowl Thai in White Settlement, who said the shooter was “my best friend.”

“He lived with me three years,” Suthamtewakul told the Star-Telegram Monday. “I don’t think he’d do this. He has a gun, but I don’t think he’s that stupid. He didn’t seem aggressive to me.”

Alexis, who also worked occasionally as a waiter and deliveryman at Happy Bowl, had recently taught himself to speak Thai before visiting Thailand. Suthamtewakul apparently had not realized that he friend was been shot and killed by police, telling the reporter, “Wait, he’s dead? I call him, but he doesn’t answer phone.”

Alexis’ most recent landlord, Somsak Srisan was just as surprised by what happened in Washington Monday. “Oh boy, I can’t believe this,” he said. “He was always very polite to me. When he lived at my house, I never see him get angry about anything. My feeling is if he was angry about anything, he didn’t show that to me.”

“I can’t believe he would do anything like this,” Srisan added. “He always behaved well around me.”

Another unidentified friend confirmed that Alexis was an adherent of Buddhism. “He loved to go to temple, go to meditate in Thai and English,” the friend said. “He could do both of them.”

But even before the mass shooting today, Alexis’ life was not always so peaceful. Back in September 2010, the former Navy reservist was arrested for allegedly shooting a firearm through the floor of a neighbor in his building. Four months later, he left the Navy.

Watch “best friend” Suthamtewakul speak to reporters in Fort Worth, Texas below, via KDFW-TV: