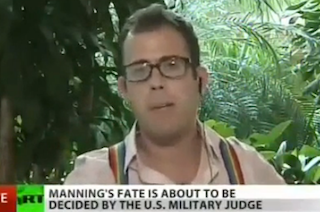 Foreign correspondent James Kirchick took over a Russia Today segment on Bradley Manning Wednesday morning, using his time to denounce Russia’s recent slate of anti-LGBT laws. “You have twenty-four hours a day to lie about the United States and to ignore what’s going on in Russia,” Kirchick said, to the surprise of his fellow panelists. “I’m gonna take my two minutes to tell people the truth.”

RT is financed by the Russian government. When the anchor segued to Kirchick for a discussion on Manning’s sentence, Kirchick whipped on a pair of rainbow suspenders and excoriated the network. “Being silent in the face of evil is something that we can’t do,” he said, “so being here on a Kremlin-funded propaganda network, I’m going to wear my gay pride suspenders and speak out against the horrific, anti-gay legislation that Vladimir Putin has signed into law.”

“I’m not interested in talking about Bradley Manning,” Kirchick said. “I’m interested in talking about the horrific environment of homophobia in Russia right now, and to let the Russian gay people know that they have friends and allies in solidarity from people all over the world, and that we’re not going to be silenced in the face horrific repression that is perpetrated by your paymaster, Vladimir Putin.”

“I don’t know, as a journalist how you can go to sleep at night,” Kirchick told the panel. “Everybody who works for this network should be ashamed of yourselves.”

When another panelist tried to argue that RT had addressed the anti-gay atmosphere in Russia the previous week, Kirchick reminded him that Russian journalists would be jailed if they participated in such news segments in their own country.

After a commercial break, Kirchick was gone from the screen. “We invited a guest on to discuss the fate of the whistleblower,” the anchor said, “but he used the chance to discuss his views on other unrelated issues and that’s why we had to take him off air. We would like to say sorry for any confusion caused.”

Watch the full clip below, via RT: