Gen. Mike Hayden Jabs at Inequality Rhetoric: Real 1% are Those Who ‘Defend the Other 99%’
video

Gen. Mike Hayden Jabs at Inequality Rhetoric: Real 1% are Those Who ‘Defend the Other 99%’ 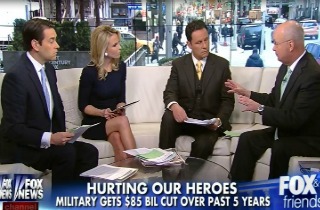 Former Director of National Intelligence Gen. Mike Hayden joined the hosts of Fox & Friends on Thursday morning where he tore into the administration for enacting sweeping cuts to the budgets of the armed forces. Hayden took a swipe at the rhetoric surrounding the debate over inequality in the process, saying that the real 1 percent in this country are those who “defend the other 99 percent” of Americans.

“Now the other ones, that’s going after the entitlements of the military forces and the families,” Hayden said. “We talk a lot about the one percent. Let me give you another sense of one percent; 1 percent of the country has defended the other 99 percent of this country for the last 13 years.”

He said that the personnel budget for the military has been “exploding” in recent year and the military is in danger of becoming a “social services and health care organization that occasionally fights wars.”

“The real problem that you have suggested is that we’re capping the entitlements of this 1 percent who have sacrificed, and we don’t have the courage to take on the bigger entitlement problem of the other 99,” Haden concluded.