Geraldo Denounces ‘Bogus’ Lawsuit and TMZ: ‘I Will Die Before I Give Them a Penny’ 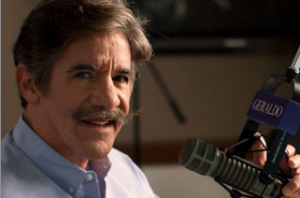 Geraldo Rivera continued toe defend himself Thursday morning against a lawsuit filed earlier this week by the William Morris Endeavor Agency. Rivera dismissed the suit as “totally bogus” on his radio show, saying he hasn’t worked directly with the agency since the early ’90s, and blasted TMZ for breaking the story without first getting his side.

“It is a totally bogus lawsuit by greedy, money-grubbing agents,” Rivera said Thursday. “The fact of the matter is I have not had a contract with William Morris since 1994.” He explained that he signed a contract with an agent named Jim Griffin, who was fired from William Morris in 2010, at which time he stayed “loyal” to his agent.

“For them to bring this lawsuit is absolutely outrageous,” Rivera continued, “and I am just as mad at TMZ for telling their side of the story without even attempting to talk to me. I mean, how lame is that?” He suggested that TMZ head Harvey Levin is so “scared” of William Morris’ power that they didn’t question the merits of the case.

“Where’s the contract?” Rivera demanded to know, calling the agency a bunch of “B.S.’ers.” He said he’s “furious” with the company, and added, “I will die before I give them a single penny.”

“You’re a bunch of punks. Get out of my life!” he said, getting more heated. “I am really ticked off, this is beyond the pale.”