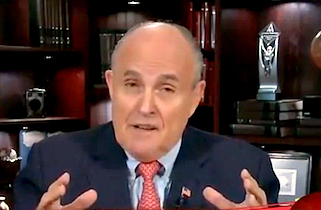 Former Gotham Mayor Rudy Giuliani and current officeholder Bill de Blasio got into a cable news tit-for-tat following the Eric Garner grand jury decision a couple weeks ago, one that seemed, thanks to Giuliani’s apparently open Fox News invitation, as if it might never end.

But Giuliani came to the very modest defense of de Blasio Sunday morning, trying to ease Police Union head Pat Lynch off of his rhetoric effectively blaming de Blasio for the murder of two NYPD officers in Bedstuy last night.

“It goes too far to blame the mayor for the murder, or to ask for the mayor’s resignation,” Giuliani told Fox & Friends Weekend.

If you were waiting for a “but,” here it is. “But I don’t think it goes too far to say the mayor did not properly police the protests. He allowed the protesters to take over the streets. He allowed them to hurt police officers, to commit crimes, and he didn’t arrest them. And when you do that, similar to what happened in Crown Heights, you create a great riot. He should have known better. For that he has to take accountability.”

“I feel bad the mayor,” Giuliani continued. “He must be heartbroken over the loss of two police officers. I can’t believe this is what he wanted. I don’t he’s a bad man in any way. I think he’s a man who’s pursuing the wrong policies.”