Glenn Beck’s Israel Rally An International Referendum: ‘How Do You Feel About Jews?’ 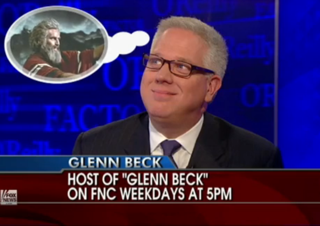 Glenn Beck thinks a second Holocaust is coming. As outlandish as that comment may sound, it is difficult to find any other meaning to his words on The O’Reilly Factor last night, where he declared “we’re headed down the same path” as 1933 and that, given Hamas and Hezbollah are “more blatant” than Hitler, his rally in Israel is a way to remind the world that they should be prepared to answer whether you are “willing to hide [a Jew] behind a wall in your house.”

Perhaps because it was the night before the faux-Rapture, or maybe because he has little time left at Fox News, or possibly because President Obama‘s speech on the Middle East made for even more desperate times than usual, Beck was in rare form on Friday. Bill O’Reilly, who is usually more comically dismissive of Beck in their segments, did jokingly compare him to Moses and Miss Cleo, but otherwise let him explain a bit more about his “Restoring Courage” rally in Israel. “I personally think that the Jews are in real trouble,” Beck warned, calling the “Arab Spring” a “lie” and “Hamas and Hezbollah and all of those guys, they’re exactly the same as Hitler.” He then told O’Reilly that his rally was not just about standing “with Israel, but with a Jew. How do you feel about Jews?” he asked. “Are you willing to put one and hide one behind a wall in your house?”

O’Reilly then deviated the conversation from this point to one he has visited before this week: why President Obama, despite “doing the right thing” with Muslim outreach, has little support among Muslims. “Mahmoud Abbas could become President of the United States and he would lose all credibility,” Beck noted, saying anti-American sentiment in the Muslim world has nothing to do with who is in charge.