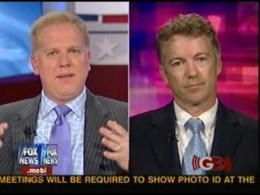 When a candidate starts blaming the media for their poor showing it is usually a sign that they are getting desperate. Trey Grayson does not appear to be an exception. Grayson is running against Rand Paul (son of Ron) in today’s hotly contested Republican Senate primary in Kentucky.

Grayson is considered the establishment candidate and has been endorsed by Mitch McConnell, the senior senator from the state and the minority leader of the party. Yet he looks likely to lose to Rand whose experienced an unlikely surge in popularity leading up to the primary. Grayson thinks this popularity is due to the “softball” interviews Rand has been getting on Fox News. This from an interview Grayson gave to WaPo via Dave Weigel:

Has blaming the media ever worked as a political argument or defense? Ever? That’s not to say the media is not culpable at times, they most definitely are, but as a defense for sinking poll numbers it is almost always a bad plan. Says Weigel, who has been following Rand and the media:

Does Grayson seriously think it’s a bigger advantage to be the son of a presidential candidate who scored a whopping 6.7 percent of the vote in the 2008 Kentucky primary than it is to be the candidate endorsed by the state’s senior senator, the minority leader of his party? Because I’ve been covering Paul and his network since 2007, and I have seen many, many people try to use their connections to him in campaigns and get nowhere. Look at Peter Schiff, an economist who appears frequently on Fox News and Fox Business, who brought Paul backing into his race for U.S. Senate in Connecticut and who has gone nowhere.