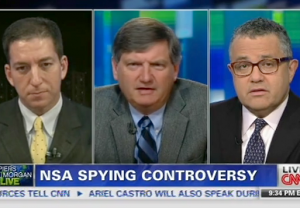 Tonight marked the second night in a row that Guardian journalist Glenn Greenwald tussled with CNN legal analyst Jeffrey Toobin over the release of NSA surveillance programs, only this time he was joined by New York Times journalist James Risen (who’s currently involved in a leak case of his own). Greenwald and Risen tag-teamed Toobin to rebut some of the most ridiculous claims made to date around the surveillance debate.

Toobin got Greenwald to clarify that the XKeyscore program revealed on Wednesday primarily targets international e-mails, though Greenwald insisted there’s still plenty of leeway for abuse. Risen added that it’s hard to “separate domestic from international that cleanly.”

Which brings us to logical fallacy number one: Toobin believes that Edward Snowden is a criminal who “should not have done what he did,” but thought that the public discussion is good, and said, “My hat’s off to Glenn for investigative reporting.”

Risen pointed out the blatantly obvious problem with Toobin’s logic.

“We wouldn’t be having this discussion if it wasn’t for him. Why do you think–I mean, that’s the thing I don’t understand about the climate in Washington these days, is that people want to have debates on television elsewhere, but then you want to throw the people who start the debates in jail.”

This is not the first time Toobin has made this assertion, as I noted in a column here last month. Here’s what Toobin said on Morgan’s program mere days after the first NSA revelations came out:

“There are many good reasons to protest this law. I’m troubled by this law. But I think there are right ways to do it and wrong ways to do it. And by a 29-year-old kid just throwing open the safe and giving away documents that people have devoted years of their lives to creating and protecting, that’s the wrong way to protest this.”

It really bears repeating that the national security apparatus wasn’t suddenly going to have a come to Jesus moment and decide to become more transparent all of a sudden. We have a secret court with its own secret interpretation of the law, so the government’s pretty firmly in the “secrecy” camp. Snowden releasing the documents was pretty much the only way the public was ever going to find out about these programs.

But that wasn’t the only logical fallacy Toobin pushed, he also repeated the same ridiculous talking point that basically boils down to, “Boy, that freedom-loving Snowden certainly loves those freedom-hating countries, doesn’t he?” Greenwald shot back that the reason Snowden went to China and Russia instead of staying is because we have “a country full of Jeffrey Toobins” that would bring him up on charges the millisecond he steps on American soil.

The idea that Snowden isn’t going to free countries so boo on him sounds nice in principle, but the free nations he could have gone to happen to be allies with the United States that aren’t going to welcome in a fugitive that the U.S. government charged under the Espionage Act with open arms. Remember how the Bolivian president’s plane was diverted when there were reports Snowden was on board? Portugal and France didn’t want Snowden in their airspace, let alone on their soil. And countries that, say, don’t have as favorable a view of the United States will be more likely to welcome someone who’s making its government look bad.

But there I go, using logic again.