Greenwald Snarks at MSNBC: I Defend Snowden Like You Defend Obama ’24 Hours a Day’
VIDEO

Greenwald Snarks at MSNBC: I Defend Snowden Like You Defend Obama ’24 Hours a Day’ 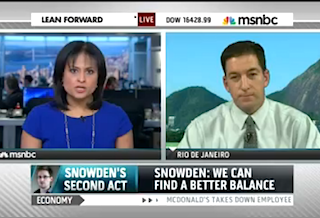 Journalist Glenn Greenwald appeared on MSNBC Thursday, one day after Edward Snowden delivered a Christmas address to television viewers in the UK and around the world from Russia. Things got heated when MSNBC anchor Kristen Welker cited critics who’ve accused Greenwald of “crossing a line” in his defense of Snowden. “What do you say to your critics who say you’ve become more of a spokesman for Edward Snowden?” she asked.

“I think that’s ludicrous is what I say to that,” Greenwald shot back. “Every journalist has an agenda. We’re on MSNBC now, where close to 24 hours a day the agenda of President Obama and the Democratic Party are promoted, defended, glorified, the agenda of the Republican Party is undermined. That doesn’t mean the people who appear on MSNBC aren’t journalists, they are.”

He said that every journalist has a “viewpoint” and he doesn’t hide the fact that he finds Snowden’s decision to expose the NSA’s surveillance programs “heroic.”

-RELATED: Like Clockwork, Joy Reid Is Annoyed About Glenn Greenwald Sniping at MSNBC

I think the point is not so much about MSNBC and what happens here,” Welker said in defense of her employer, “but more that sometimes when you talk about Edward Snowden you do defend him, and some people wonder if that crosses a line.”

“Sure, I do defend him just like people on MSNBC defend President Obama and his officials and Democratic Party leaders 24 hours a day.” When Welker pushed back that “not everyone on MSNBC does that 24 hours a day,” Greenwald conceded that it’s “not everybody, but a lot of people do.”

After comparing Snowden to figures like Chelsea Manning and Daniel Ellsberg, Greenwald said, “I absolutely do defend what Edward Snowden does and I don’t pretend otherwise.”

[Editor’s note: This post has been updated to reflect that Welker did not “accuse” Greenwald of “crossing a line” in defending Snowden, but rather that she was citing critics who’ve said as much.]