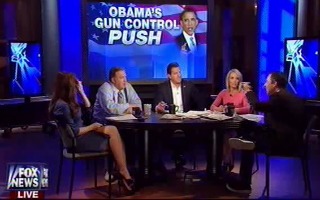 Two of the hosts of Fox News Channel’s The Five engaged in a screaming match on Thursday over the hypocrisy of Democratic politicians who claim to be against gun violence but are selective in their enforcement. Bob Beckel and Greg Gutfeld battled each other over this condition; Beckel claimed that the National Rifle Association has tied the hands of Democratic politicians, but Gutfeld countered that Democrats prefer to ignore violence in urban centers where their political base resides.

“This is a great issue for the left because they appear to be tough on crime when, really, they’re only tough on guns,” Gutfeld said. “If they really cared, there would be federal handgun laws that stipulate heavier penalties for people who use handguns. Repeat offenders. Why not a federal law for — three strikes you’re out — for robberies and homicides…”

“Because the NRA,” Beckel interjected. “The thugs don’t let them do it.”

“It’s the liberals,” Gutfeld exploded. “Why is it that you guys on the left only focus on one percent of the crime when in Chicago you have, what, one Newtown every two weeks? You have 42 people dying.”

“Handguns are the weapons of choice for criminals,” Gutfeld said.

“They demonize the NRA but they won’t talk about gangs,” Gutfeld continued. “The NRA is as dangerous as the Latin Kings?”

“They are the most evil lobby in all of Washington,” Beckel replied.