Guest To Ed Schultz: Paul Ryan’s Budget Cuts Are ‘Antithetical To The Fundamental Issue Of Jesus’ 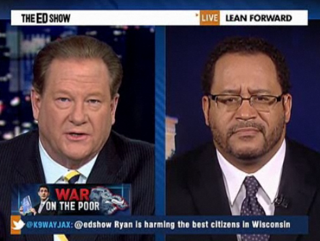 Rep. Paul Ryan‘s calls for fiscal austerity have not exactly been met with cheers around The Ed Show, as is to be expected. But on the program last night, host Ed Schultz took a look beyond the politics to Rep. Ryan’s interview with Catholic network EWTN, and how the Congressman has explained discrepancies in thought between himself and the church. Joined by Prof. Michael Eric Dyson, Schultz argued that Rep. Ryan’s reliance on the Church for charity was an easy way out, and Dyson argued that taking away safety nets was “antithetical to the fundamental issue of Jesus.”

Schultz noted that Rep. Ryan had used the support of leaders of the Catholic Church to corroborate his argument against government-funded birth control, but now, he “all of the sudden dismiss[es] the bishops” because “Catholic leaders don’t believe Ryan is applying the teachings of his faith.” Dyson agreed that the double standard was somewhat absurd. “He says ‘it’s not all the bishops’ as if we could take a quarry and see what they believe… it’s so arbitrary,” he argued, concluding that it proves Rep. Ryan and others who agree with him are “not serious about engaging his faith in the critical dimensions of social justice.”

Dyson believed the policies were a easy way out for the government, a way to “wash its hands of all responsibilities and the programs and policies that made these people poor– or at least perpetuated legacies of inequity.” To force private charity to take up the burden, Dyson argued, was “ridiculous and contrary to the best impulses of his religion.” He did not just target Rep. Ryan, but all Republicans in noting that there were “no claims of let us pull ourselves by our bootstraps” when TARP came around, and that the proposed budget cuts were “antithetical to the fundamental issue of Jesus who said ‘take care of those who are least of these,'” concluding, to Schultz’s agreement, that helping the poor as a community was among the “marks of genuine and authentic faith.”