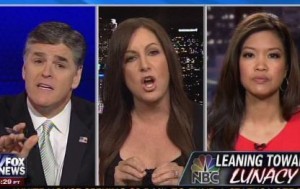 Sean Hannity was fired up tonight over MSNBC host Melissa Harris-Perry making comments in ads for the cable network that Hannity decried as socialist and collectivist, especially her now-infamous ad talking about how children belong to their communities. Michelle Malkin and Leslie Marshall got heated over the ad and where the responsibility of taking care of children should lie, with Malkin decrying “liberal hellholes” and proudly declaring, “Hands off my kids!”

Marshall told Hannity she agreed with Harris-Perry’s point, arguing that teachers are part of the community, and children are sent there every day to learn. She said that paying taxes to support a public school system ultimately means communities are taking care of children anyway. Hannity decried “liberal moral superiority and sanctimony” in trying to say more people than just the parents are responsible for children, while Malkin slammed MSNBC as “Maoist Socialist Nutballs Broadcasting Company.”

Malkin called Harris-Perry’s ad “anti-American” and found it interesting that the higher-ups at MSNBC were okay with this airing on their network. She proudly declared, “Hands off my kids!” Hannity suspected liberals are just trying to instill their values in the children of conservative parents. Marshall confronted Malkin and asked her where her passion is for children going hungry all over the country with no one to take care of them. Malkin shot back that local and state governments ought to be helping those people, as opposed to “federal investment.” Malkin told Marshall, “You people do not operate in reality!”

Malkin claimed that every single “liberal paradise” in which they “spend, spend, spend” end up being an “abysmal failure.” Marshall argued that the question is not just about money, but also morality. Malkin ended the segment by charging that “liberal hellholes” all over the country are “impervious to social justice.”