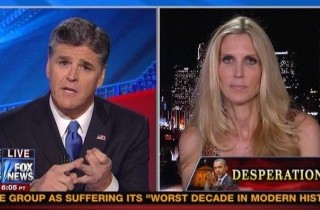 Wednesday night on Hannity, conservative columnist Ann Coulter and host Sean Hannity strongly expressed their mutual disappointment in GOP Senate candidate Todd Akin‘s refusal to step aside in the wake of his controversial comments on rape and pregnancy.

The two then lamented what they see as a double-standard in which President Barack Obama is “utterly silent on Bill Maher, silent on Romney being called a ‘murderer’, causing this woman’s cancer. He is silent on the ‘felony’ talk. He is saying that Republicans want dirty air and water. He doesn’t get called out for it. This is a campaign of smear and slander.”

Coulter agreed, adding that “Todd Akin is being attacked for saying stupid about rape. The Democrats’ keynote speaker [Bill Clinton] is someone who was credibly accused of rape. […] We can’t have a war on women because the Democrats have won that war between Teddy Kennedy, Bill Clinton, and Anthony Weiner.”

“We have gone from an easy win to a loss,” Coulter lamented. “And you might say, what Todd Akin cares about is stop overruling Roe v. Wade. I don’t think he does.”

“What he cares about is his own ego,” she continued. “He was showing off, fancy footwork and what he knows about the medical impact of rape on a woman’s body. He has harmed the Republican Party, and this is not a time to be fooling around.”