Harris-Perry: Bombers’ Muslim Faith As Relevant To Bombing As Ben Affleck Movies About Violence In Boston 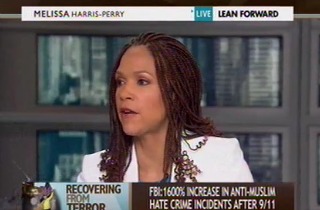 Making the point that the Tsarnaev brothers’ Muslim faith at the moment bears little relevance to the investigation into the brothers’ decision to attack the Boston Marathon last week, MSNBC host Melissa Harris-Perry observed that Tsarnaev’s faith is about as relevant to the investigation right now as are Ben Affleck movies about violent events in Boston. Her panel guests agreed and added that Americans have to “otherize” violent actors in order to absolve themselves from responsibility for or connection to their violence.

“We don’t really know,” said Harris-Perry, throwing her hands up about the discussion into the Tsarnaev’s motives. “The younger brother, he’s getting all kinds of tweets from his friends. I think part of the answer is that it’s still an open question.”

“They don’t have the privilege of being anonymous – ‘they,’ speaking of people of color or other minorities – we don’t know yet, but we fill in the blanks,” said Georgetown University Professor Michael Eric Dyson. “We fill in the blanks with what makes us feel the most comfortable that this was an exceptional, extraordinary case that happened because they are this.”

“I keep wondering: is it possible that there would ever be a discussion like, ‘oh, this is because of Ben Affleck and the connection between Boston and movies about violence?’” Harris-Perry asked. “And, of course, the answer is ‘no.’”

“Given that they’re Chechen, given that they are literally Caucasian, our very sense of connection to them is this framed up notion of, like, Islam making them into something that is non-[unintelligible],” Harris-Perry continued.

“The point is that it’s important to say, ‘that is not us,” Dyson agreed. “We want to demonize the other. We have to distance it from the dominant culture.”