Hillary Clinton Says Yes, There Is An Individual Right to Gun Ownership 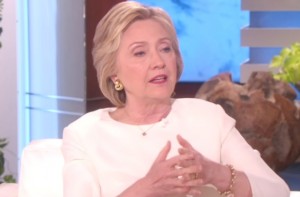 Former Secretary of State and presumptive Democratic presidential nominee Hillary Clinton cleared up a major policy question Monday morning, thanks to CNN New Day anchor Chris Cuomo. Both Hillary and Democratic rival Bernie Sanders have recently been asked whether they believe the Second Amendment guarantees an individual right to firearms ownership, which many fine legal minds dispute. Sanders and Clinton have both dodged the question, with Hillary raising hackles and eyebrows by responding that  “If it is a constitutional right, then it — like every other constitutional right — is subject to reasonable regulations.”

On Monday morning, Chris Cuomo nailed Hillary down on the subject by asking her if she agreed with the 2008 District of Columbia v. Heller Supreme Court decision that says gun ownership is an individual right:

Well, I think you have to read the entire decision. I believe law-abiding, responsible Americans have a right to own guns. But I also believe with the vast majority of Americans, there are common sense, constitutionally permissible steps we can take to take the guns out of hands of criminals. That is what Justice Scalia has said in Heller. I have disagreed with some of the ways they’ve applied that. There have been more than 23 shootings by a toddler this year alone. we have to sort through the decision. Yes, there is a right for law-abiding, responsible Americans to own guns and, yes, there are reasonable common sense measures to try to keep people safe from guns. We have to figure out the best way to move forward on that. That’s what I’m committed to doing.

Previously, the NRA had mischaracterized comments Hillary made at a private event as disagreement with the individual right portion of Heller, but that leaked audio actually showed Clinton disagreed with other parts of Heller:

The idea that you can have an open carry permit with an AK-47 over your shoulder walking up and down the aisles of a supermarket is just despicable.

This morning marks the first time, post-Heller, that Hillary has weighed in on the individual right question.