House Passes Resolution to Defund Obamacare, GOP Calls on Senate to Do the Same
video

House Passes Resolution to Defund Obamacare, GOP Calls on Senate to Do the Same 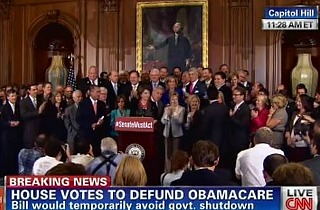 The House Republican conference took to a podium in the Capitol Building on Friday minutes after a continuing resolution to fund the government and defund the Affordable Care Act passed by 230–189 votes. The House GOP insisted that the Senate follow their lead and pass a resolution which defunds President Barack Obama’s signature health care reform law.

“Today, when we acted, it wasn’t just a group of Republicans,” McCarthy said. “It was a bipartisan vote.”

Two Democrats joined with the GOP to pass this measure, but one Republican defected and voted against this bill. Reps. Jim Matheson (D-UT) and Mike McIntyre (D-NC) voted to pass this resolution, while Rep. Scott Rigel (R-VA) voted against it.

Cantor referenced four Democratic Senators who are believed to be vulnerable as they seek reelection in 2014 who are going to have to take a vote to strip this bill of its provisions which defund “Obamacare.”

RELATED: The Five Takes On GOP’s ‘Defund Obamacare’ Plan: ‘Not Going to Happen’

“The American people don’t want the government shut down and they don’t want Obamacare,” Boehner said to the cheers of his fellow Republicans. “The House has listened to the American people. Now it’s time for the United States Senate to listen to them as well.”