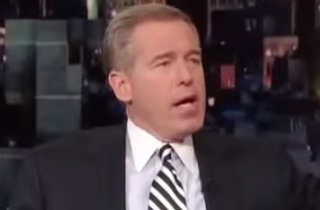 Considering that celebrity seems to be, especially among the young, the most prized commodity in American life, it sure does come with disadvantages. This is particularly true among those who are inflicted with the debilitating disease of being super-famous, such as NBC newsman Brian Williams.

Journalism (which is on life support largely because of, and in response to, this celebrity-driven era) is an endeavor which is particularly ill-suited for those who are major celebrities. This is largely because those who seek celebrity almost always desperately want or need to be both loved and popular. However, more often than not, good journalism causes one to be intensely disliked.

Massive fame also makes one completely out of touch with the real world, which, like a pilot who loses their superior eyesight, renders the reporter incapable of doing the very basics of the job. There seems to be little doubt that, in the curious case of Brian Williams, celebrity has played an enormous role in his downfall and, in my opinion, his apparent inability to get back up.

It has been well documented by now that Williams has been, at best, a serial exaggerator regarding his involvement in major news stories. If Williams wasn’t a huge celebrity and, I believe a charter member of the liberal media elite, these episodes would outright be called “lying.”

It is in this type of preferential treatment where the seeds of Williams’ self-destruction were sown. In all likelihood, the first time he “exaggerated,” no one called him on it because to do so would be dangerous to the career of anyone who might have been close enough to even consider giving him that tough message.

Surrounded within his tiny celebrity bubble only by sycophants who desperately want to maintain their place within the prosperous inner-circle, he never had someone with the guts to say, “Hey Brian, that didn’t happen. You better knock this off.”

I had a similar experience with Sarah Palin after I made a movie about the 2008 election, which featured my interview with her and somehow became her de facto media spokesperson for a while. I found myself being apparently the only person in her very small “circle” willing to give tough advice — a reality so obvious that she once wrote an email to her staff, with me accidentally on the chain, saying, “If I have to endure a Ziegler email, we all do.” It was not a coincidence that our relationship eventually ended prematurely.

With Williams, his problem was exacerbated by some unique factors. In his mind, he was in the story-telling business and anyone who has ever spent any time in a bar knows that a narrative limited by the truth is not nearly as entertaining as one without such mundane restrictions. I am also convinced that Williams probably came to believe that these stories were mostly true, largely because his celebrity allowed him think of himself as super special. After all, super special things (like somehow being sent a piece of the chopper that went down, and was destroyed, in the bin Laden raid) routinely happen to super special people.

But his celebrity didn’t just help get him into this mess. It is also clear that it made it far more difficult for him to get out of it.

With huge celebrity comes massive ego (especially after having just signed a huge new contract). When Williams finally got called out publicly on the Iraq War “fib” and needed to apologize, his ego and overconfidence in his position helped cause him to do an exceedingly poor job of it. But the botched apology wasn’t the only crisis management misstep by Williams where celebrity played a role. While the news anchor deserved his fate, had he played his cards much better he could have easily survived this, perhaps almost unscathed.

The biggest mistakes Williams made were voluntarily taking himself off-air, followed by accepting a long suspension with no ability to even tell his side of the story. These acts were roughly the equivalent to pleading guilty before even being formally charged and castrating himself because someone asked him to cut his hair.

It is easy to see how Williams was manipulated into taking these actions which have made the job of getting rid of him far easier for NBC than it would have been had he not agreed to them. Because of his celebrity and ego, Williams surely thought that the very same corporate suits who had been kissing his backside for years and just signed him to a fat new contract must be telling him the truth when they assured him he would likely return in six months.

You can almost hear them telling Williams, “Brian, trust us. We have your back. We still love you, buddy. We just need to let this die down a bit,” and then laughing at his naïveté once the door was closed and the star reporter’s testicles were safely put away in a lockbox.

Celebrities like Williams think that all the adulation they have gotten from those around them is based on them as a person or talent. It’s not. It’s based in the position that celebrity is in to help those people around them. Once the position disappears, so does the adulation, as well as any fake loyalty which may have gone with it.

Agreeing to that long of a suspension, with no ability to tell his side of the story, while being replaced by Lester Holt, was sheer lunacy. Williams might as well have signed his own termination letter, or at least taken the contract buyout and saved himself this time in purgatory.

How Williams and his people blew their response is very reminiscent to me of what happened to the late college football legend Joe Paterno, whose epic demise I have studied more closely than probably any other person (for the sake of this analogy, please accept what I have found the facts of the case to clearly indicate: Unlike with Williams, Paterno was completely railroaded in the Sandusky saga).

Paterno also issued what was perceived (wrongly, thanks to a quotation wrongly truncated by the media) as a botched “apology.” Paterno was also prevented by his bosses (and then by his advisors) from speaking out in the media before it was too late. Similar to the Williams self-suspension, Paterno stripped himself of his own power by announcing his retirement just before his firing. The legendary coach (or those around him) also banked too much on his personal relationships with his bosses to save him in a time of crisis. Finally, the people in charge at Penn State to whom Paterno was closest were actually more likely to throw him under the bus because they knew they were more vulnerable to allegations of having put friendship ahead of alleged (imaginary) ethical lapses.

This leads me to the recent series of leaks to the news media from inside NBC which sparked me to write this column. When The New York Times is being told by bigwigs at NBC that the investigation is “expanding” and that new damaging allegations were being explored, that was an obvious sign that Williams was toast. That simply would not be happening at that level if NBC’s plan was to bring Williams back.

Interestingly, there were a couple of minor pushback leaks in response to this news which indicated that Andy Lack, the new chairman of NBC News, was trying to figure out a way to save Williams. However, Lack is known as a friend of Brian’s and this makes it far more difficult for him to go out on a limb for Williams because of the obvious perceived conflict of interest.

Even the leaks related to Lack make it pretty clear that bringing Williams back to his old position will be nearly impossible. The Lack “pushback” leaks feel far more like a gesture to Williams to show him that at least someone is still fighting for him, even if they know they are inevitably going to lose that war.

— —
>> John Ziegler is a conservative documentary filmmaker who specializes in media-related issues. He is also hosts a nationally-syndicated radio talk show on Sunday nights. A commentary he did on the Brian Williams situation can be heard in the third hour of his most recent show. You can follow him on Twitter at @ZigManFreud.