How Can CNN Possibly Claim It’s ‘The Most Trusted Name in News’? 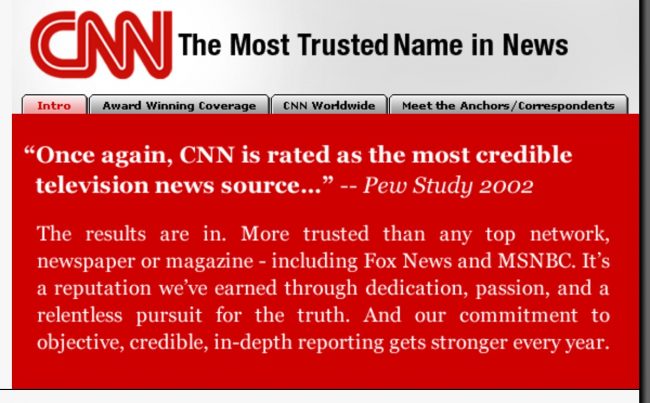 CNN has touted itself as “the most trusted name in news” for as long as anyone can remember, and viewers of the channel are reminded of this every hour, on the hour, by hearing the basso profondo voice of James Earl Jones bellowing this claim. And while all networks tend to bend or interpret studies or reviews to create promos, what is their source to even theoretically support such a claim? We doubt it exists. The last study we found that could even technically bolster this claim comes from a 2002 Pew Study. Yes, that is 15 years old.

In fact, most of the recent studies of trustworthiness in news, don’t just fail to support CNN’s claim, they appear to directly belie it,  evidenced by a recent study put out by the University of Missouri. As you can see in the chart below, CNN is right in the middle of the pack, just a touch below CBS, which according to this survey, is the median media outlet regarding trust. 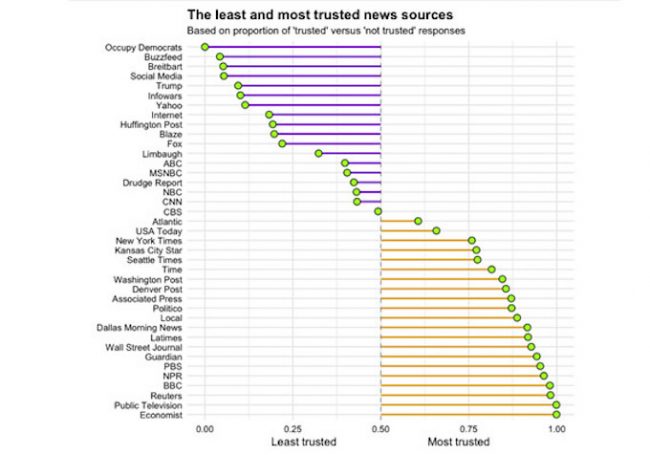 This is just one survey, but a more recent 2014 Pew Report suggests a similar standing for CNN who clocks in at ninth overall, behind broadcast news outlets like ABC, CBS and NBC, but ahead of its competitors MSNBC (15th) and Fox News (21st.)

Can CNN defend “The Most Trusted Name in News” tagline as just a little hyperbole? Perhaps. But that defensive approach undermines the very claim it’s making. How can one truly trust an outlet that is prone to promotional invention? A more likely explanation is that this tagline is leftover from a very different cable news era, a time when CNN didn’t travel in the world of the opiniotainment and analysis that now defines most cable news programming.

There has been so much written already about how media consumption has either created or catalyzed the very politically divided state of things today. And it doesn’t take a genius to notice a) the blurred line between opinion analysis and objective news (if that can even exist anymore in a post-modern world); and b) viewers now choose to watch programs that reinforce their own bias and opinion instead of getting straight information. And CNN is not an exception.

There is no question that CNN has enjoyed a significant rise in ratings, relevance and ad revenue over the past couple of years. But since the election and inauguration, CNN, as a network, has consistently been one of President Trump’s harshest critics. This is not intended to demean the news organization that lays at CNN’s foundation, who have broken loads of exclusive stories surrounding this administration’s policies, scandals and, yes, palace intrigue.

But because CNN has been so ardently focused on the blemishes of the Trump administration, the President has aimed to undermine its authority — and well trust — by calling it “Fake News.” This has led to loads of animus directed towards CNN from Trump’s most ardent supporters. On one hand, these critics can’t be taken too seriously, but even judging by the comments section of Mediaite, there is a significant group of people who are taking part in over-the-top digital campaigns like #FakeNews and #CNNisISIS.

Given the current media landscape, and the lack of support for their claim, it’s probably time for them find a new tagline. That is, if they truly care about being trusted.

We reached out twice to CNN to ask about what survey supports this claim and have not heard back, which is odd given how quickly most network spokespersons typically respond to these sorts of queries. If they reply we will update.