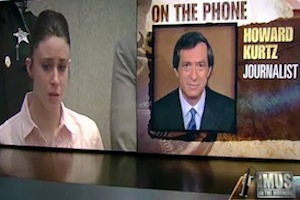 Media critic and journalist for The Daily Beast Howard Kurtz spoke with Don Imus this morning and continued to express his frustration with the media’s obsessive coverage of the Casey Anthony trial and verdict. Kurtz suggested it makes his “blood boil” that “basically a local crime story” was turned into a national soap opera by the media. Yet Imus humorously responded, “become a brain surgeon if you’re so unhappy with the media.”

Kurtz elaborated on his reaction to the excessive amount of Casey Anthony coverage, parting ways with some like Mediaite founder and ABC News legal analyst Dan Abrams who believe such criticism is using the media as a scapegoat:

“It was great in terms of ratings, I thought it was appalling in terms of the way in which it just seemed to take over the American media. There was undoubtedly more arguing and more coverage and more legal loudmouths popping off about this verdict last week than there was about the fact that the entire country is about to go into default.”

Imus laughed at the fact that Kurtz “spent a couple of minutes or so belittling the media coverage and then offered [his] own opinion,” and told Kurtz “you’re part of the problem, you’re part of the media!” Kurtz emphasized his point is merely that he’s hopeful he could help nudge the media towards covering more important stories instead of continuing to participate in “sensationalizing a tragic murder case.” Kurtz also discussed the ongoing debt negotiations, but had much less “sensational” thoughts to offer on that topic.